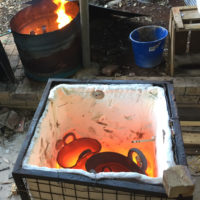 I  came across the Raku firing method during a time that I was researching different kinds of firing techniques, around 30 years ago. Raku captured my imagination due to the exciting and unpredictable nature of the results. I attended a week long workshop given by Jeff Mincham in Bundaberg in the early nineties and I was hooked. I had my first Raku kiln built a few week later.

I am one of only a few female potters in the country, I guess due to the demanding and sometimes dangerous nature of the process. I have developed my own style and glazing technique and many of my signature pieces are a produced in this way. 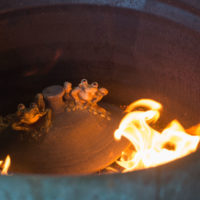 Raku means pleasure or enjoyment. It is an ancient ceramic firing technique which is said to have been invented in Kyoto, Japan for a tea ceremony in the 16th century. The Raku process produces remarkable, unique pieces and whilst traditionally, was used on hand built sculptures, it can be applied to all kinds of clay creations.

The Raku firing is a secondary firing process and involves removing the pieces from the Raku kiln whilst still red hot and then placed in a container filled with flammable material, such as newspaper or sawdust. A lid is then placed over the dum causing a flare up that ensues remove the oxygen from the pot’s glaze that creates a wide spectrum of colours. Areas without glaze turn dark providing a stark contrast to the glaze. 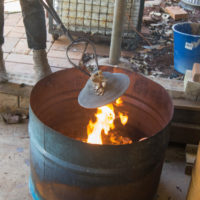 This is where the magic begins.

No two pieces are the same, nor can they be reproduced, making this process unpredictable and exciting. I guess that’s why I’ve been hooked for so long. I often end up with blisters, smoke in my eyes but after a glass of red and a hot bath, the passion remains.